What happens to the Agriculture Bill if there is no Brexit?

Following the decisive defeat of the Prime Minister’s Brexit deal in parliament this week, Julie Robinson considers the implications for the Agriculture Bill if the UK does not leave the EU.

The whole rationale behind the Agriculture Bill was to enable a new support scheme for farmers to be put in place following our departure from the EU and the common agricultural policy. There are, however, some other elements in the bill which could survive a no-Brexit outcome. 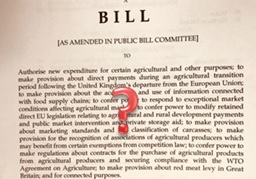 Without the freedom to determine our own domestic agricultural policy, much of the bill will be consigned to the no-Brexit bonfire of draft legislation. If we stay in the EU, we will continue to be bound by the same CAP framework as all other member states. That is pretty much the end of the line as far as internal discussions about a radical new support policy based on public goods delivery goes, unless significant discretion is allowed to member states under the EU rules that will govern the CAP from 2020.

There will be no need for a primary act allowing the government to design and make payments under agricultural or environmental support schemes. That will all happen at EU level, under the CAP. At most a few subordinate domestic regulations would be required, as is the case now, to cover decisions over which member states are given discretion.

This happens at EU level. The UK government has no power to support market prices unless permitted by EU rules. There will be no need for primary domestic legislation to cover the point.

If the UK stays in the EU, we will have little scope to depart from the rules on marketing standards and carcass classification which are set down in EU legislation.

The sole purpose of the Agriculture Bill provisions was to exempt POs and associated organisations from domestic competition law restrictions. If we remain in the EU, the EU’s own exemption will cover the activities of POs and these clauses will not be needed.

Although the UK is a member of the World Trade Organisation in its own right, it operates for WTO purposes under the umbrella of the EU and is subject to the EU’s common commercial and agricultural policies. If we remain in the EU, there will be no need for separate domestic legislation to ensure compliance with WTO Agreement on Agriculture.

Increased transparency in the food chain can be legislated for whether or not we are in the EU.